Large propellers provide a high degree of bite and control at low speeds but high drag when sailing. Small propellers have less drag but also less control for slow speed maneuvering, and are inefficient at normal speeds.

The optimum choice of shaft speed and propeller depends on the displacement, type, length and shape of the boat. A typical propeller for a 25ft long keel displacement yacht might be 14×9, three-bladed. The first figure is the diameter in inches, the second a measure of the pitch or coarseness of the blades. This is the length, again measured in inches, of an imaginary cylinder of water drawn through the propeller in the course of a single revolution.

Helical gears
A helical gearbox incorporates two multi-disc clutches and two gear trains terminating in the output shaft. One clutch is engaged for forward, the other for reverse. Because of the action of the gears rotating in the lubricating oil, helical gearboxes tend to run hot. Large gearboxes or those working in unusual circumstances therefore need oil coolers.

No adjustment is needed as the clutches are self compensating for wear. It is, however, important to ensure that full movement is obtained when the control arm is engaged so as to avoid clutch slip.

The lubricating oil specified for helical gearboxes is usually Automotive Transmission Fluid (ATF). Under no circumstances deviate from the manufacturer’s specifications.

Epicyclic gearboxes
Epicyclic gearboxes use a sun and planet gear train which reverses when the outer gear is restrained (see diagram below). The engagement adjustment needs to be positive to avoid slippage and the manufacturer’s recommendations regarding lubrication must be followed closely.

Cone clutch gearboxes
Cone clutch-type gearboxes incorporate two gear trains, similar to the helical gearbox. The cones work as clutches when the male and female parts are forced together. The gear trains provide a fixed ratio of propeller shaft speed to engine speed. 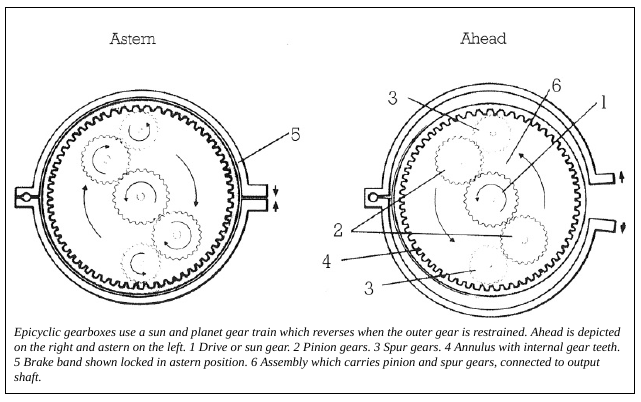 In most cases lubrication is with engine oil but in some gear oil is specified. In all cases, only use the oil recommended by the engine or gearbox manufacturer.

View all posts by Jack