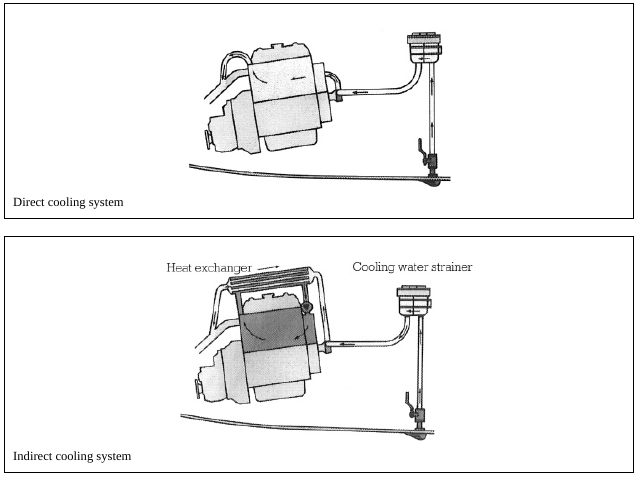 The temperature of combustion in a diesel engine is around ten times the temperature required for the moving parts to operate efficiently. Uncooled, an engine will rapidly lose power and may seize up completely.

Three types of cooling system are used to prevent this happening. Each has its advantages for certain types of boat. Air cooling, for instance, was extensively used on working canal boats where water inlets were vulnerable to blockage by weed, simplicity was of the essence and noise unlikely to cause a problem.

Air cooling
The main advantage of air cooling is that there is no water to corrode the engine’s internals. A disadvantage is that the engine needs a large amount of air around it to keep it at a reasonable temperature. The running temperature is also difficult to control. Air-cooled engines are also very noisy compared with water-cooled ones, which accounts for their declining popularity now that canals are used more for relaxation than for work.

Direct (raw-water) cooling
This is generally used on smaller engines. The engine is cooled by raw water drawn directly from outside of the boat. It is pumped through the water passages in the engine, into the exhaust pipe and exits through the exhaust. A simple system, it has a slight advantage in that sea water is less likely to freeze in the block and cause damage than fresh water (although beware, it will freeze if the air temperature is cold enough). The main drawback is that the internal waterways will in time corrode and fill with salt deposits and other debris. A major strip-down and overhaul is then required.

The temperature of indirect-cooled engines can generally be regulated better because the flow around the engine is controlled by a thermostat. This control allows the engine to run at a higher temperature than its raw-water cooled counterpart. Furthermore the fresh water system does not accumulate debris or salts and can easily be drained, flushed and refilled, so no major strip-down is needed. Always use de-ionised water in the freshwater system and always use the correct proportion of coolant (antifreeze plus corrosion inhibitors) EVEN IN TROPICAL CLIMATES because the coolant raises the boiling point of the mixture and avoids boiling at engine hotspots. In addition the corrosion inhibitors stop rust developing in the system – the resulting debris can block the passages.

Cooling problems can be encountered with engines where the ambient air temperature is high and in humid tropical climates with higher water temperature. For these conditions ensure that there is no restriction to the raw water flow eg by blocked or kinked pipes and fittings. Ask advice from the engine manufacturer about the possibility of fitting a higher capacity water pump. This applies to main engines and also generator sets which are generally encased in soundproof covers, making cooling even more difficult.

The majority of steel inland waterway boats use a system called ’keel’ cooling. Here the engine cooling water is circulated through a cooling tank which is part of the hull below the waterline. No raw water is needed to cool the engine, so there are no problems with mud, debris and weeds.

View all posts by Jack